Jack's incredible sense of humor and proven track record in a major Cincinnati theatre production demonstrates he's more than up to the challenge of a demanding role in film. He has a tremendous film presence and nails challenging roles that require comedic timing, subtlety, and when necessary, a wide range of dramatics. In "Strike Team Justice," he played a warm and lovable nerdy pre-teen with a vivid imagination. That short film received runner up in the Dances With Films Los Angelas Competition. And in "Brief Interview with Internet Cats," he played the comedic Tuffy the Cat marveling at his continuous and inexplicable proclivity to fall into boxes. It was hilarious. Jack delivered a wide range of emotions and impeccable comedic timing as the title role in "Casper, the Friendly Musical" for the Children's Theatre of Cincinnati. He sang four solos and flew (with harness and cable wires) above Taft Theatre's stage. With 17 performances at Taft Theatre, which has the capacity of 2000 people per show, he touched the hearts of many local theatre attendees. Jack shined when he played Sebastian in "The Little Mermaid Jr." The Cincinnati Academy of Performing Arts director allowed him to improvise and utilize his ability to read the crowd and use his impeccable comedic timing. He made the audience guffaw with laughter and received a standing ovation for his performance. Jack's commendable work ethic and agreeable nature makes him a joy to work with. He's a natural actor with with the ability to adapt and make transitions when necessary.
Height: 5’ 2"
Weight: 100
Hair: Blonde
Eyes: Blue
Shoe: 7
Waist: 27
T-Shirt: XL
Chest: 35 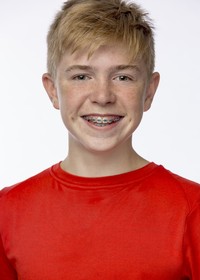